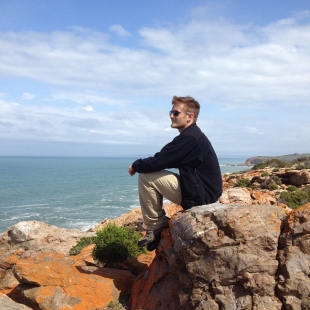 Co-Founder & Producer
In 2009 J. Branson Skinner, a musician and activist, was studying the globalization of public health and societies at NYU's Gallatin School of Individualized Studies when he co-founded Of Rags Clothing, a fair trade fashion cooperative with bases in New York City and Accra, Ghana. Branson was motivated to build relationships between the makers and the wearers of the artful clothing he saw in the streets of Accra. As a NYU Reynolds Scholar for Social Entrepreneurship, Branson has spoken about fair trade, fashion and sustainable development at over 20 universities throughout the United States. He co-produced the inaugural NYC Fair Trade Coalition Lookbook and the first ever (sustainable) Fashion's Night Out at Manhattan's Textile Arts Center. Through Of Rags, Branson brought together form and function in fashion by partnering with the West Africa AIDS Foundation Passion Squad peer educators program to share public health messages with student designed t-shirts in Accra. Despite the success of these initiatives, the mission to build relationships between the makers and the wearers of the clothing that transcended simple financial exchanges was not fulfilled. This drove Branson and the then creative director for Of Rags Clothing, Liz Ricketts, to develop a new approach. In 2011 Branson, Liz and a team of supporters launched a unique program in classrooms in Brooklyn, New York, Washington, DC, Detroit, Michigan and Accra, Ghana connecting learners through scarves that learners individually created for one another. This program quickly became Branson's main professional focus. Today Branson serves as the producer of The OR Foundation, an organization working to end modern day slavery through education. He has co-facilitated work with learners across the USA, in Ghana and in South Africa. A self-taught web developer since the age of 10, Branson develops and actively maintains The OR's web platforms. In 2014 Branson was awarded a grant from the Drupal Association for his work in the open source web development community. In addition to his work with The OR, Branson is currently pursuing a masters degree in community planning with a focus on building community through textile recycling, creative youth development and regenerative agriculture.
I spent the summer between my junior and senior years of high school with the program Amigos de las Américas in a small town named Coalaca in Lempira, Honduras, Central America. While living by myself in a room with a dirt floor in a Honduran farming household I saw too much injustice to persist in any false ignorance. I woke up to face the fact that the friends I made in Coalaca had three opportunities: work on their subsistence farm, move to the capital city in search of a job that doesn't exist, or immigrate without documents to the US. The school in Coalaca offered a place to have one's spirit broken by the teacher's cane before moving on to one of those bleak futures. That was, if my friends were lucky enough to survive drinking dirty water and often scrounging for food. But in the same town I was witness to beauty and love like nothing I'd ever experienced before. I don't mean beauty purely in the nostaligic sense that people worked the land with hand tools and that most views were unobstructed by human made edifices. Certainly I found something beautiful in that, but more than anything I felt the warmth of families. Siblings taking care of one another. Neighbors working together. Friends celebrating. A community taking action to address the things we all saw as disturbing. Then I flew back to my home in the capital of the United States.

There is beauty where you least expect it.

My mission is to share this knowledge with my peers. I believe we can make one community out of seemingly different worlds.

There is always something to learn. Despite the privilege of my traditional education, I didn't come to recognize this truth in the classroom. Only through the fortune of travel was I able to expand my perspective. Today I am working to transform education so that our expectations of beauty and our ideas of what we have to learn and what we have to teach are built on the global community we find right at our fingertips. 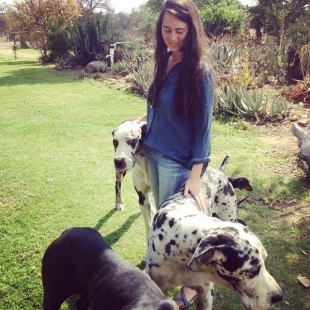 Co-Founder & Director
Liz Ricketts grew up in Flint, Michigan and traveled extensively with People to People. She studied fashion design as an undergraduate at University of Cincinnati's College of Design, Architecture, Art and Planning. She developed a deep knowledge of the fashion industry working as a consultant for several fair trade and eco-fashion startups. She co-produced the inaugural NYC Fair Trade Coalition Lookbook and the first ever (sustainable) Fashion’s Night Out at Manhattan’s Textile Arts Center. Liz also has worked for the industry leading Albright Fashion Library and top vintage boutiques in New York and London. Liz has styled dozens of celebrities for film, TV, print, and social media. Several of Liz’s designs, all made from recycled clothing and surplus textiles, have been featured in film and print. In addition, Liz has worked as an image consultant for visually impaired individuals in New York City. Liz was moved to develop her unique path in the fashion industry when she witnessed the undervaluation of designers and their creations at the highest levels of the industry. Before finishing her undergraduate degree with the Dean’s Award, Liz’s independent research led her to appreciate that this undervaluation was pervasive throughout the entire industry, from design offices in New York City to cotton fields in Uzbekistan. Shortly after leaving design school, Liz participated in the Environmental Justice Foundation’s Fashion Cycle from London to Paris. Today Liz serves as the director of The OR Foundation, an organization working to end modern day slavery through education. Together with her partner Branson Skinner, Liz has inspired students from elementary school through college to uncover the ethical issues of the fashion industry. She has also developed the extensive curriculum called These Things Take Time, which traces the history of clothing from modernity to before the Industrial Revolution and pushes students to address current issues that they identify in their communities. In the Spring of 2016 Liz completed a Master of Education degree as an Urban Scholars Fellow at the Harvard Graduate School of Education. In addition to her work with The OR, Liz teaches as an annualized adjunct professor in the design school at the University of Cincinnati.
I never liked poetry until I did.

Imagination is my hero. We cannot lean on the power of personal experience alone to dismantle indifference - this is the excuse of those who refuse to be still. Be Still. Instead of giving up some things give yourself to something. Everyday is the occasion. Find how, collect why and ask often. Truth can always be translated. Technology is employable, people are performable. If my work is defined by a position, I have become replaceable - I can change that. With labels ideas become empty, with names ideas can act. Do not create mindfully only to embody mindlessly. Possession is reciprocal - we can only 'own up' if we recognize this. Today, ownership is a radical act. Humanity is not an infection, do not sell or buy a cure. You cannot bank on time - do not try to take, leave or transfer moments. Everyone, no one, and anyone are not wholesome. None the less. Attend to your silhouette, know your perspective and create your portrait. Never be afraid to do a headstand. Sustain common sense. Love is a verb, respect its multiplicity. A beautiful mind is recognizable. Elevate those you admire but leave the pedestals behind. Care not to judge.

When you feel alone, stop to celebrate the impossibility of that. Stay.